The third quarter of 2022 provided little respite for investors hoping to see a change in trend across the financial markets after significant downside volatility in the year’s first half. While a relief rally was witnessed in July, the positive sentiment spanning both risk-oriented and high-quality assets during the month reversed course in August and September, with most major equity index levels establishing fresh year-to-date lows and interest rates ascending to the highest level in more than a decade. Stubbornly high inflation, historically tight labor market conditions, and a continued imbalance between aggregate demand and available supply were critical factors behind increased tightening efforts by the Federal Reserve (Fed) during the quarter.

Key policy actions by the Fed during the quarter included a doubling of the pace of quantitative tightening through a reduction in balance sheet assets and a 75-basis-point hike to the federal funds rate in September, formally placing the policy rate into restrictive territory. Global equity returns were overwhelmingly negative in the third quarter, as domestic equities witnessed solid relative outperformance versus their international developed and emerging market counterparts.

The final month of the third quarter of 2022 presented market participants with much to digest. Notable events included geopolitical developments such as the Bank of Japan’s (BOJ) intervention in the currency market to help stem the yen’s decline versus the U.S. dollar (USD)—a move not observed in nearly a quarter of a century—as well as new quantitative easing efforts by the Bank of England (BOE) aimed at restoring financial market stability amid a sharp increase in UK gilt yields, double-digit inflation, and the weakest exchange rate value of the pound versus the USD since the mid-1980s.

While the aforementioned policy moves of the BOJ and BOE in September were directed at easing monetary conditions, in the U.S., the Fed took several steps to tighten monetary conditions. On the policy rate front, the Fed hiked the federal funds rate by 75 bps at its late September meeting, placing the new upper bound on the target rate at 3.25%, a rate that exceeds the long-run neutral level by 75 bps, formally placing this key interest rate into restrictive territory. Additionally, the Fed increased the size of its quantitative tightening campaign by doubling the monthly balance sheet runoff pace, increasing from a previous pace of $47.5 billion per month to a new targeted rate of $95 billion per month.

Diverging policy trajectories between the Fed and other major global central bank players has been a key driver behind the USD’s sharp year-to-date appreciation. According to the commonly cited ICE U.S. Dollar Index (DXY), the USD stood at +17.2% by quarter-end—a nearly 20% gain year-to-date following a 6.4% increase in 2021. Various measures of the USD’s global exchange rate value stand at multi-decade highs. The Bank for International Settlements’ real effective exchange rate for the USD, an inflation-adjusted and trade-weighted proxy of the currency’s relative value, increased to the highest reading since 1985 during the quarter, sitting more than two standard deviations above its long-run trend.

While the U.S. continues to grapple with one of the most severe cost-of-living crises of the modern era, the sharply appreciating USD has likely contained some of the inflationary impulses that often accompany a significantly depreciating local currency. Moreover, while financial market performance in the early trading days of the fourth quarter has taken on a more upbeat tone—likely due to early indications that some key major global central banks have had to prematurely reverse course on their policy tightening initiatives—recent U.S. inflationary data likely points to even further tightening in the coming months, given that the stickiness of the current inflationary regime has shown little evidence of reversing course.

To conclude, third-quarter performance across most global asset classes and sub-asset categories was significantly negative, with diverging policy trajectories among some of the most critical central banking authorities dominating financial media headlines. While actions taken by the BOJ and BOE took on an easing bias, the Fed remained steadfast in its campaign to restore price stability by doubling the pace of quantitative tightening and hiking the federal funds rate into restrictive territory. 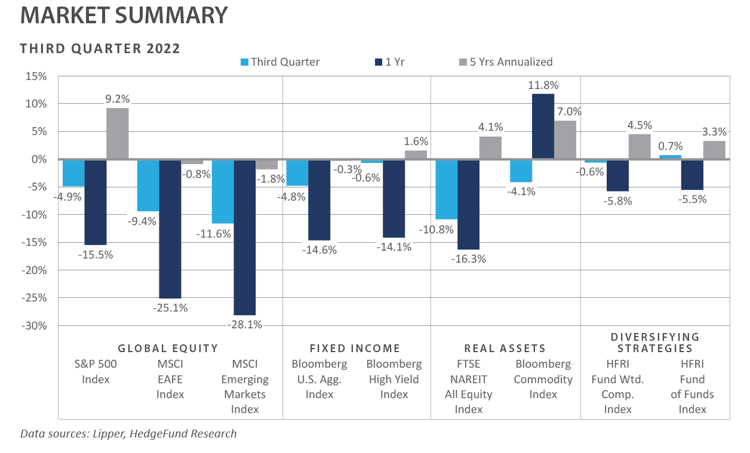 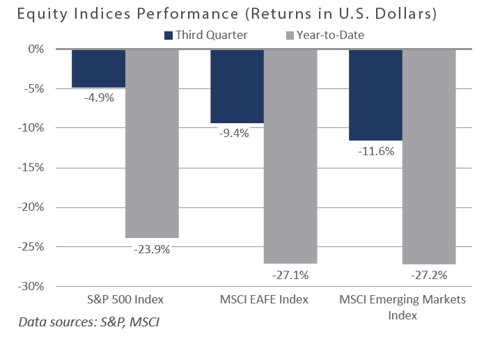 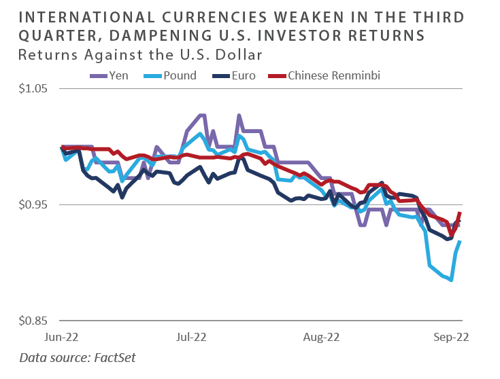 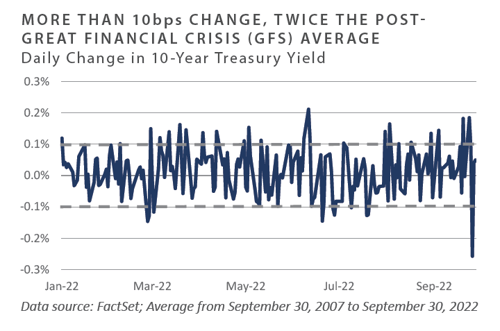 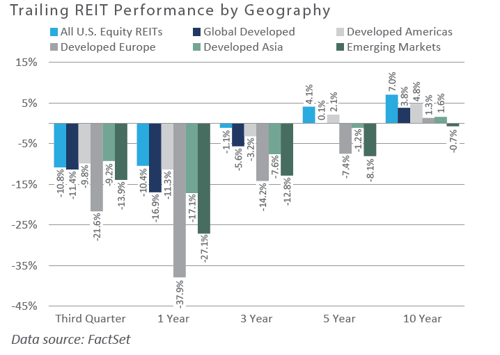 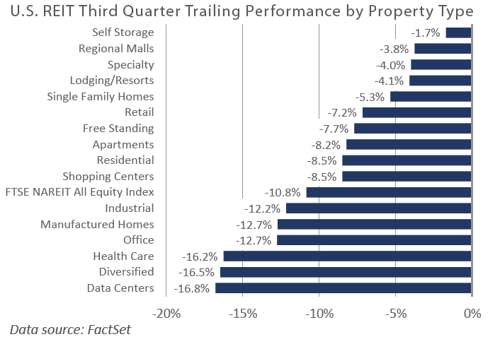 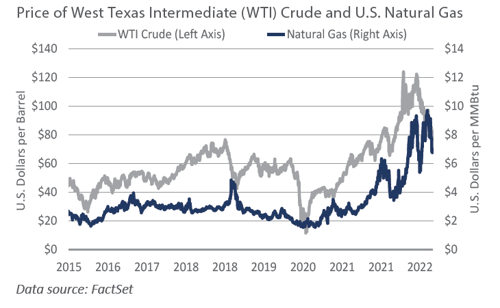 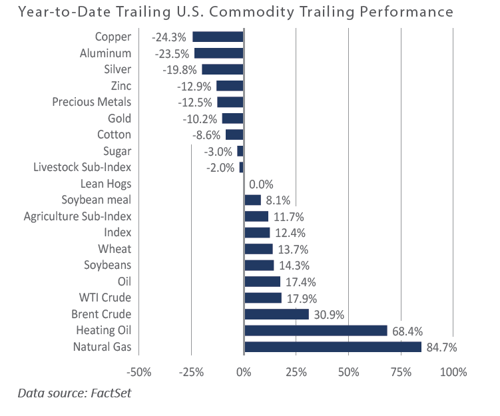 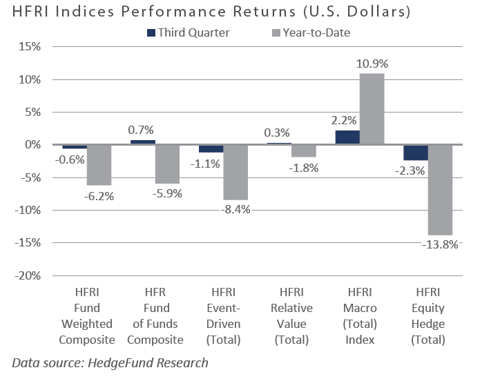 FTSE Real Estate Indices (NAREIT Index and EPRA/NAREIT Index) includes only those companies that meet minimum size, liquidity and free float criteria as set forth by FTSE and is meant as a broad representation of publicly traded real estate securities. Relevant real estate activities are defined as the ownership, disposure, and development of income-producing real estate. See https://www.ftserussell.com/index/category/real-estate for more information.

HFRI Monthly Indices (HFRI) are equally weighted performance indexes, compiled by Hedge Fund Research Inc. (HFX), and are used by numerous hedge fund managers as a benchmark for their own hedge funds. The HFRI are broken down into 37 different categories by strategy, including the HFRI Fund Weighted Composite, which accounts for over 2,000 funds listed on the internal HFR Database. The HFRI Fund of Funds Composite Index is an equal weighted, net of fee, index composed of approximately 800 fund- of- funds which report to HFR. See www.hedgefundresearch.com for more information on index construction.

S&P 500 Index consists of 500 stocks chosen for market size, liquidity and industry group representation, among other factors by the S&P Index Committee, which is a team of analysts and economists at Standard and Poor’s. The S&P 500 is a market-value weighted index, which means each stock’s weight in the index is proportionate to its market value and is designed to be a leading indicator of U.S. equities, and meant to reflect the risk/return characteristics of the large cap universe. See www.standardandpoors.com for more information.

All data is as of September 30, 2022 unless otherwise noted.