Investors breathed a sigh of relief in July amid rebounding performance across most major asset classes and categories, despite confirming evidence of a slowdown in U.S. economic activity and a further tightening of monetary conditions by the Federal Reserve (Fed). Performance themes during the month favored the rate-sensitive corners of the financial markets—bucking the trend that has generally been in place for the past year—as interest rates declined sharply. Global equities generated strong returns on the month, with notably robust performance across small cap and growth sectors, while emerging markets lagged meaningfully. Bond performance across both high quality and below investment-grade sectors was broadly positive, with high yield bonds (Bloomberg U.S. Corporate High Yield Index) posting the strongest monthly gain (5.9%) since October 2011. Similar to stocks and bonds, real asset returns in July were largely positive, despite an ongoing growth slowdown both domestically and abroad.

Persistent inflationary pressures, driven primarily by lingering supply chain disruptions and a historically tight labor market, prompted the Fed to hike the policy rate 75 basis points (bps) at their late July meeting, an increase which placed the upper bound on the targeted level at 2.5%. While the 75 bps hike was widely anticipated by the bond market, the increase was significant in that the 2.5% rate now matches the Fed’s estimate of the neutral policy level—which the Fed deems to be neither accommodative nor restrictive on economic activity. 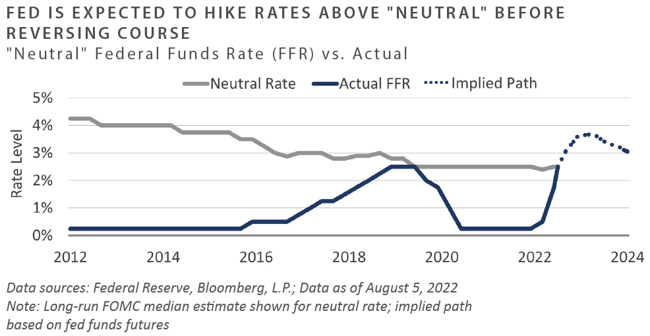 With bond market implied gauges reflecting an elevated likelihood the Fed will hike rates another 75 bps at their September meeting, U.S. monetary policy is set to turn restrictive this fall, a dynamic which is anticipated to serve as a headwind to broader economic conditions and potentially further pressure risk assets. With the economy already weakened by inflation, restrictive monetary policy may indeed help temper the persistent inflationary impulse while pressuring the downward trajectory of economic activity further.

The Fed’s efforts at engineering a soft landing—something which they historically have had a poor track record of achieving in their more than 100 years of existence—continues to appear a lofty goal. In the first six months of 2022, the economy witnessed back-to-back quarters of negative inflation-adjusted GDP growth, despite monetary conditions appearing relatively accommodative. It stands to reason that the Fed shifting to a restrictive stance, which is anticipated to be a growing theme over the next six months, should help restrain both aggregate demand and investor risk-taking in the near term.

This dynamic is confirmed by the continued flattening bias of the Treasury yield curve, with many curve slopes reflecting inversion, an indication that monetary conditions already appear restrictive, despite the federal funds rate well below the inflation rate and the policy rate just now reaching a neutral level. The spread between 2- and 10-year Treasury notes, for example, declined a staggering 29 bps in July—following a decline of similar magnitude in June—with this spread descending below levels witnessed before the 2007-2009 Global Financial Crisis.

Both sides of the Fed’s dual mandate point to the need for further tightening of monetary conditions, despite an uncooperative economic backdrop, bringing to light the Fed’s lack of action to get inflation under control in mid- 2021 when cost pressures began to push above the Fed’s 2% targeted inflation level.

To conclude, July presented global investors with overwhelmingly positive returns, a welcomed development following the immense challenges investors endured in the first six months of the year. While some market participants have been quick to extrapolate July’s performance rebound as evidence the worst has passed, the lack of fundamental improvement both at the macro and micro level illustrates that risk to asset prices may be on the horizon with the Fed’s pivot from accommodative to restrictive policy. 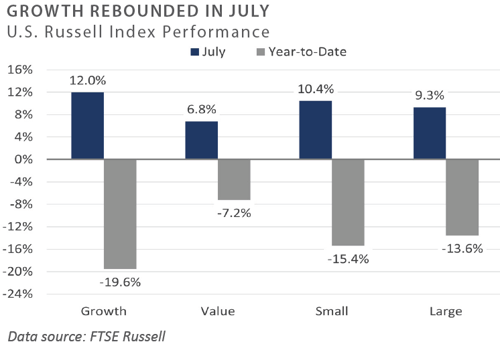 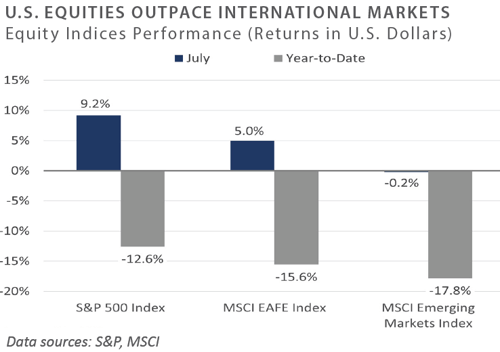 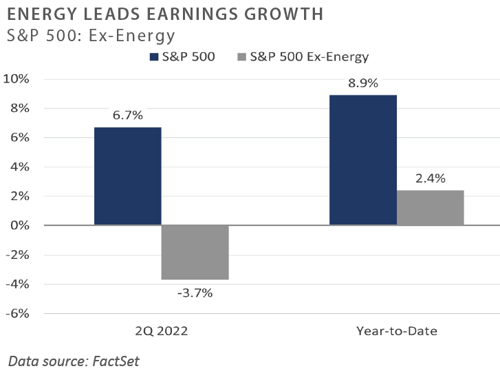 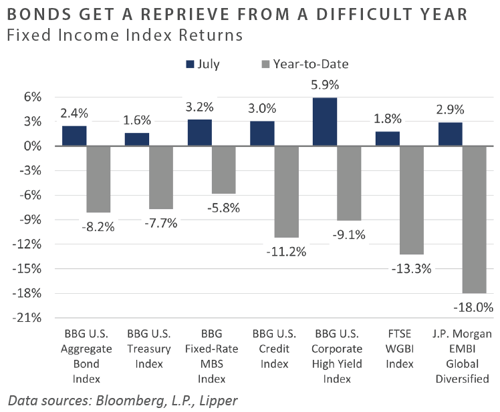 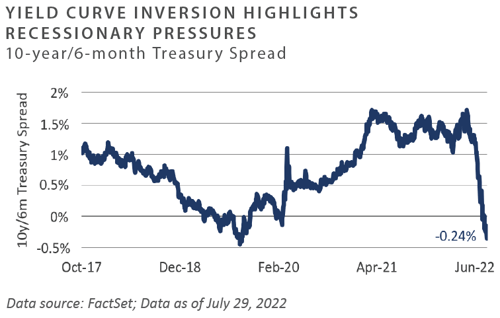 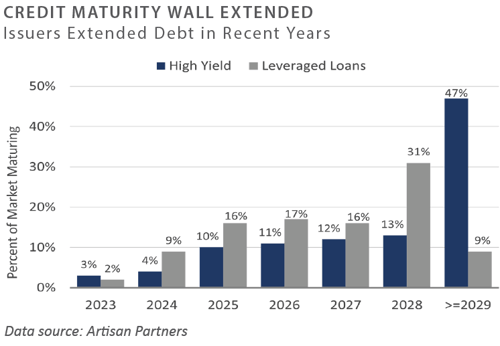 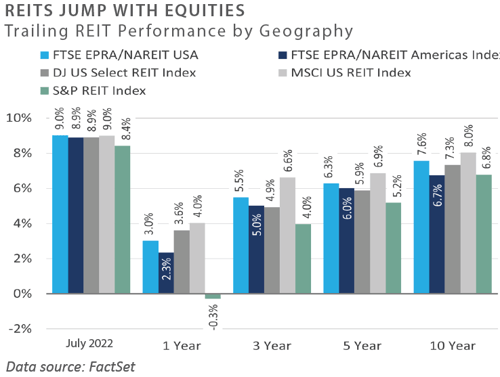 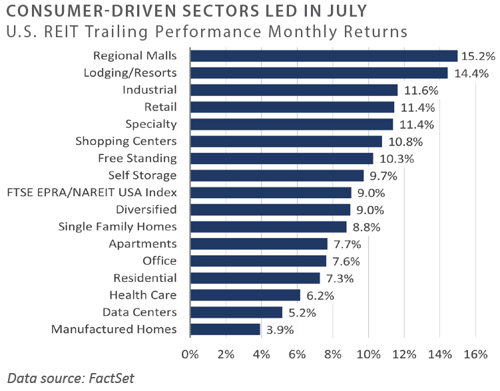 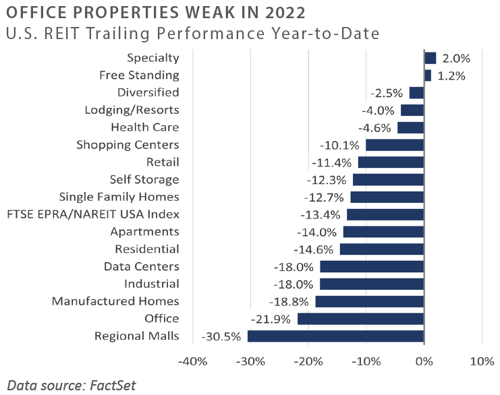 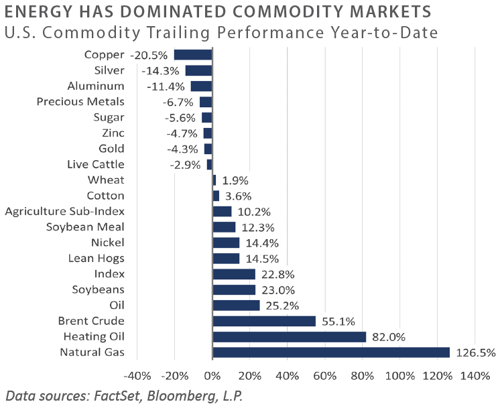 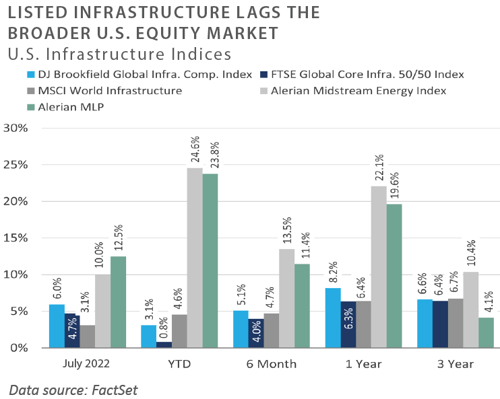 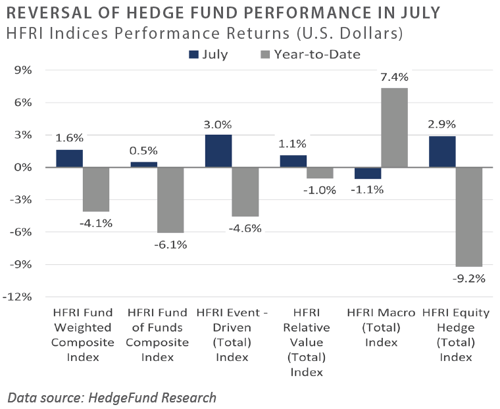 The CBOE Volatility Index (VIX) is an up-to-the-minute market estimate of expected volatility that is calculated by using real-time S&P 500 Index option bid/ask quotes. VIX uses nearby and second nearby options with at least 8 days left to expiration and then weights them to yield a constant, 30-day measure of the expected volatility of the S&P 500 Index. FTSE Real Estate Indices (NAREIT Index and EPRA/NAREIT Index) includes only those companies that meet minimum size, liquidity and free float criteria as set forth by FTSE and is meant as a broad representation of publicly traded real estate securities. Relevant real estate activities are defined as the ownership, , and development of  real estate. See www.ftse.com/Indices for more information.

HFRI Monthly Indices (HFRI) are equally weighted performance indexes, compiled by Hedge Fund Research, Inc. (HFR), and are used by numerous hedge fund managers as a benchmark for their own hedge funds. The HFRI are broken down into 37 different categories by strategy, including the HFRI Fund Weighted Composite, which accounts for over 2,000 funds listed on the internal HFR Database. The HFRI Fund of Funds Composite Index is an equal weighted, net of , composed of approximately 800 fund- of- funds which report to HFR. See www.hedgefundresearch.com for more information on index construction.

Merrill Lynch high yield indices measure the performance of securities that pay interest in cash and have a credit rating of below investment grade. Merrill Lynch uses a composite of Fitch Ratings, Moody’s, and Standard & Poor’s credit ratings in selecting bonds for these indices. These ratings measure the risk that the bond issuer will fail to pay interest or to repay principal in full. See www.ml.com for more information.

S&P 500 Index consists of 500 stocks chosen for market size, liquidity and industry group representation, among other factors by the S&P Index Committee, which is a team of analysts and economists at Standard & Poor's. The S&P 500 is a market-value weighted index, which means each stock’s weight in the index is proportionate to its market value and is designed to be a leading indicator of U.S. equities, and meant to reflect the risk/return characteristics of the universe. See www.standardandpoors.com for more information.