Our talented team of investment professionals regularly create and distribute educational materials delivering timely data, perspectives, and insight on the markets and related topics. You can review our most recent publications below.
August 26, 2019

During the first quarter of 2019, which offers the most recent data available, private markets posted solid results but were dramatically outpaced by public markets rebounding from a harsh fourth quarter of 2018.¹

While we highlight quarterly results, longer-term time periods are more relevant for these illiquid asset classes. As highlighted in the table, despite strong end-period bias, average private market returns have kept pace or bested public market returns over most longer time periods, with private real estate serving as the notable exception.

Across private capital sectors, fundraising and deal activity remains robust; however, FEG is mindful of increasing investor allocations toward private investing strategies and the increase in capital from non-traditional pools of capital — e.g., mutual funds, hedge funds, and others. As a result, ample capital is readily available across most private investing strategies. Excess capital presents a risk and investors should consider how these trends impact opportunities.

We are constantly looking for signs that the markets are overheated. It remains unclear how far purchase price multiples can creep — now above 12.5x for U.S. middle market buyouts² — before a setback reprices risk. 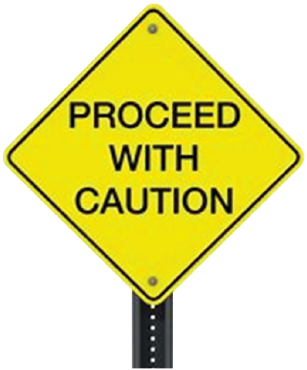 Private companies have an advantage over their public counterparts in developing new market opportunities and driving change, and their management teams and owners are strongly incented to perform. Historically, this formula has translated into premium returns. In recent periods, cheap money — in the form of low interest rates — has kept the party going by offsetting, in part, the impact of higher purchase price multiples.

Strategies have also evolved to buy down purchase prices through add-on acquisitions, and managers have increased their sophistication in deal sourcing and in implementing change. For now, while investors remain cautiously aware, there are no obvious signs that the private markets are in peril of losing their advantage.

FEG remains focused on select opportunities with experienced management teams overseeing smaller, agile funds, and the private markets continue to offer access to many dynamic industry trends. Technology has become ubiquitous. Software applications are being deployed in all industry sectors, particularly in the fin-tech and healthcare sectors; dynamic innovations are rapidly occurring in bio-tech; distribution channels have been disrupted impacting industrial real estate and creating distress in retail; and infrastructure demands in the communications and energy sectors continue to evolve in the face of growing data and continued development in domestic energy markets.

Recent strong returns and significant capital flowing into venture funds and venture-backed companies have prompted some concern. Valuations continue to rise and hold periods can be significant. Certain structural changes are influencing the market, such as companies staying private longer; capital being sourced from non-traditional venture fund sources, such as public crossover investors or larger corporate investing; and the falling cost of scaling businesses. Performance has been strong but remains meaningfully unrealized for more recent vintage years. FEG remains cautious and continues to take a selective approach, generally favoring early-stage investments, where valuations have remained relatively stable compared to late-stage investments. Select opportunities exist in both technology and life science investments. 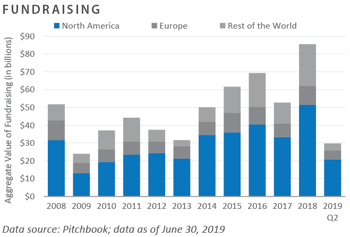 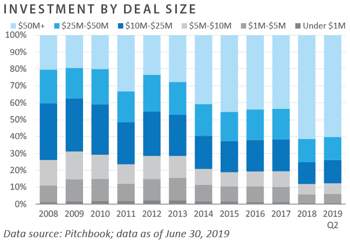 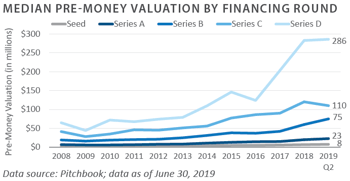 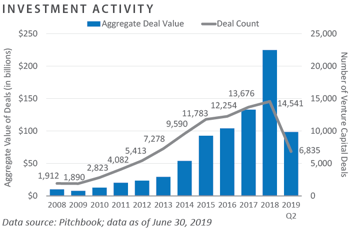 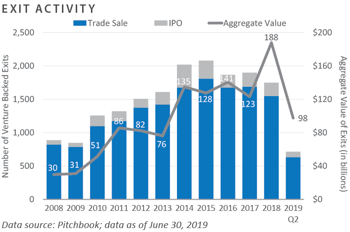 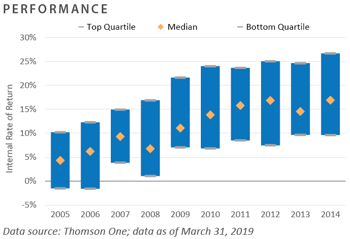 Near-record levels of available capital — i.e., dry powder — combined with elevated purchase price multiples are reason for concern within the buyout strategy. Fewer but larger funds are closing, pushing median and average fund sizes even higher. Increased competition, high valuations, and market volatility have started to negatively impact private equity-backed exit activity. Despite these trends, private equity fundraising remains constant and shows no sign of slowing down. Limited partners continue to allocate capital to leveraged buyout strategies, with the bulk of the capital in vehicles raising more than $1.0 billion in aggregate capital commitments. The proliferation of capital allocated to middle market strategies is likely to have an impact on the lower middle market in the form of higher valuations and increased deal activity. The number of transactions between private equity firms — i.e., secondary buyouts or sponsor-to-sponsor — is likely to increase. Given this backdrop, investors should remain cautious. Limited partners should continue to favor general partners with investment philosophies built on fundamental value and operational improvement — not financial engineering. Disciplined management teams with experience leading companies through multi-year macroeconomic cycles could benefit if/when the broader private equity market experiences a downturn. 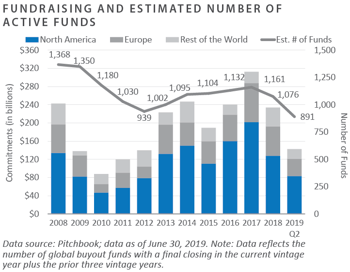 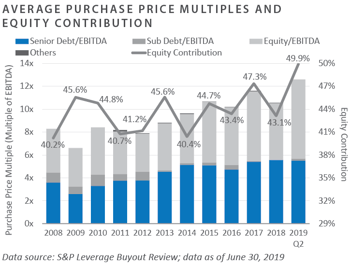 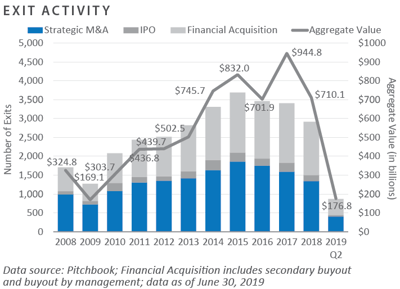 Direct lending strategies continue to overwhelm other private debt options but have begun to saturate the marketplace, as evidenced by waning demand from institutional investors. The growth in direct lending strategies in recent years has had a negative impact on pricing and covenant protection. Select managers are passing on more transactions than in previous years. Distressed fundraising remains soft relative to other private debt strategies. The market seems to have become complacent regarding the idea of a potential dislocation in the credit markets and investors appear to be waiting to see signs of real distress before allocating capital. 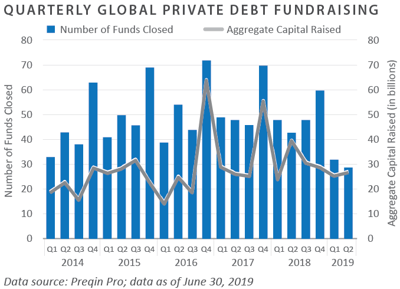 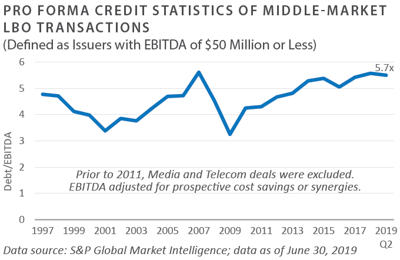 It is now 10 years into the real estate market recovery. Despite cap rates being near record lows in many markets, commercial real estate continues to offer attractive yield spreads compared to 10-year government bonds. Given the low interest rate environment globally, real estate is attracting record levels of investment from institutional investors. Broad demographic trends continue to impact real estate, including the rise of online retailing—which has been negative for retail and positive for industrial—shared work environments (office sector), and limited options for first-time homebuyers driving demand for multi-family/apartment rentals. FEG maintains a cautious outlook on the broad commercial real estate markets and continues to focus on identifying managers with theme-based, opportunistic strategies and a bias towards more defensive, niche sectors. 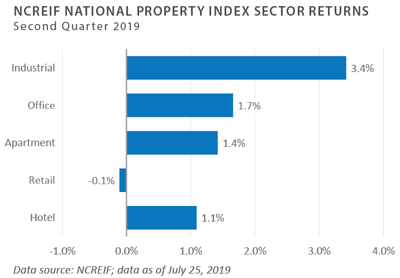 The U.S. energy environment continues to evolve, with record levels of production and volatile commodity prices for the foreseeable future. Private energy funds face multiple challenges and will need to adapt to changing market conditions and investor expectations. Performance for energy funds that deployed capital during the downturn of 2015-2016 has been strong, but many deals remain unrealized. Moreover, the strategies pursued by private energy funds will need to evolve to reflect the current environment and will likely involve longer holding periods and fewer quick realizations. Within private energy, the operator fund model — with its focus on acquisition and management of proven, developed, producing reserves — is less reliant on asset sales and instead generates returns largely from production cash flow. This model has been effective over multiple commodity price cycles, although these funds tend to be more directly impacted by commodity price movements. FEG focuses on managers who understand these factors and have integrated them into their investment strategies to remain competitive in the current market. 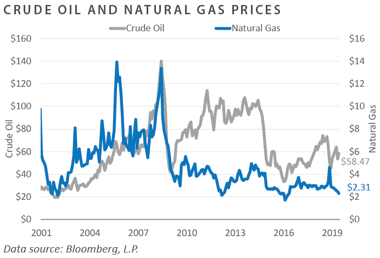 In July, FEG published “Boom to Bust to Recovery: The Evolving U.S. Energy Landscape”, a Research Insights piece outlining our views on the current energy environment. Among the key points of the paper are the pressures facing the private equity energy model, as the industry continues to face distress and bankruptcies as a result of the downturn in commodity prices that began nearly five years ago. These issues are impacting all facets of the business — from capital raising to exits — as well as potential returns for investors. The following is a brief analysis of the current environment as of mid-year 2019.

Bloomberg Barclays US Corporate High Yield Index represents the universe of fixed rate, non-investment grade debt. Eurobonds and debt issues from countries designated as emerging markets are excluded but, Canadian and global bonds (SEC registered) of issuers in non-EMG countries are included. The index includes the corporate sectors: Industrials, Utilities, and Finance, encompassing both US and non-US Corporations. See www.bloomberg.com for more information

The Russell Indices are constructed by Russell Investment, There are a wide range of indices created by Russell covering companies with different market capitalizations, fundamental characteristics, and style tilts. See www.russellinvestments.com for more information.

The FTSE NAREIT Composite Index (NAREIT) includes only those companies that meet minimum size, liquidity and free float criteria as set forth by FTSE and is meant as a broad representation of publicly traded REIT securities in the U.S. Relevant real estate activities are defined as the ownership, disposure, and development of income-producing real estate. See www.ftse.com/Indices for more information. The S&P 500 Index is capitalization-weighted index of 500 stocks.

The S&P 500 Index is designed to measure performance of the broad domestic economy through changes in the aggregate market value of 500 stocks representing all major industries.

The NCREIF Property Index is a quarterly time series composite total rate of return measure of investment performance of a very large pool of individual commercial real estate properties acquired in the private market for investment purposes only.

HFRI ED: Distressed/Restructuring Index
Distressed/Restructuring strategies which employ an investment process focused on corporate fixed income instruments, primarily on corporate credit instruments of companies trading at significant discounts to their value at issuance or obliged (par value) at maturity as a result of either formal bankruptcy proceeding or financial market perception of near term proceedings. Managers are typically actively involved with the management of these companies, frequently involved on creditors' committees in negotiating the exchange of securities for alternative obligations, either swaps of debt, equity or hybrid securities. Managers employ fundamental credit processes focused on valuation and asset coverage of securities of distressed firms; in most cases portfolio exposures are concentrated in instruments which are publicly traded, in some cases actively and in others under reduced liquidity but in general for which a reasonable public market exists. In contrast to Special Situations, Distressed Strategies employ primarily debt (greater than 60%) but also may maintain related equity exposure.