Our talented team of investment professionals regularly create and distribute educational materials delivering timely data, perspectives, and insight on the markets and related topics. You can review our most recent publications below.
June 13, 2019

The process of rebalancing trade relations between the U.S. and its primary trading partners encountered significant turbulence in May, sparking a flight-to-quality rally that helped send U.S. interest rates to the lowest level in two years. Across the global investment landscape, equity performance was largely negative during the month, with most major indices still holding on to solid year-to-date (YTD) returns, particularly for domestic sectors. Safe haven flows in fixed income propelled core bonds to a nearly 2% return in May, bringing YTD performance just below 5%, as positive momentum behind risky credit moderated. Real assets were not spared in the risk-off market environment, with steep declines across energy infrastructure and commodities. However, sharply declining long-term Treasury rates supported positive relative performance on behalf of REITs.

Throughout May, the U.S. government stepped up pressure on many of the country’s key trading partners. Tariffs on imports from China were increased meaningfully and the administration made numerous threats about imposing tariffs on certain imports from Mexico, Japan, and Europe.

Since 2018, heightened trade tensions between the U.S. and China have been a key driver behind the economic slowdown across the globe. Previously, the U.S. appeared to be resilient in the face of this backdrop, however, that dynamic has recently shown signs of reversing.

The potential for a trade war-induced economic slowdown (finally) splashed upon the shores of the U.S. markets in May, corroborated by survey-based measures, such as Purchasing Manager Indices (PMI), which slumped to near-contraction levels across both the manufacturing and services sectors.

In addition, payrolls growth – which has remained strong throughout most of the current business cycle expansion – lost some traction in May, with both the ADP (+27,000 jobs) and the BLS (+75,000 jobs) monthly job measures missing sell-side expectations and falling to sub-100,000 levels. Thankfully, leading labor market indicators, such as first-time filings for unemployment benefits, remained historically low during the month, although this trend is unlikely to persist into perpetuity.

The potential for the world’s largest economy to succumb to the fundamental weakness permeating throughout much of Europe, Japan, and China – among other regions – has applied strong downward pressure to U.S. Treasury interest rates, term structure shapes, and the steepness of the market’s expected path for near-term Federal Reserve (Fed) policy.

A strong bid for safe-haven assets such as U.S. Treasuries has placed meaningful downward pressure on interest rates. The yield on the benchmark 10-Year U.S. Treasury Note, for example, declined to 2.07% in early June, the lowest yield for this key yield metric since September 2017.

Relatedly, the prospect for a domestic growth slowdown and an associated uptick in certain recessionary estimates helped flatten the Treasury yield curve further, with the yield spread between 3-Month Treasury bills and 10-Year Treasury notes driving deeper into inverted territory, ending the month at -22 bps.

Market participants have acknowledged the presence global trade pressures and the recent threat to global growth by discounting the potential for multiple cuts to the federal funds rate over the next 18 months. Pricing on fed funds futures during the month pointed to a nearly 80% likelihood the Fed would cut interest rates at their July meeting. Similar measures, such as positioning in euro dollar futures, also discounted a full cut-and-a-half during calendar year 2020.

Investors will focus their sights on the Fed’s upcoming policy meetings for confirmation of the growing market sentiment for cuts to the current upper bound on the federal funds rate of 2.50%. A surprise in either direction – either too tight or too loose – is expected to further increase market volatility.

In summary, trade tensions spiked in May, particularly between the U.S. and China, sparking a risk-off market environment that benefited safe-haven assets and defensive sectors and drove downside volatility higher across most risky asset categories. While the U.S. economy has demonstrated resilience over the past 18 months amid a clear slowdown abroad, recent data has indicated a potential reversal of this disparity, with market participants responding by pricing in multiple cuts to U.S. interest rates over the next 18 months. 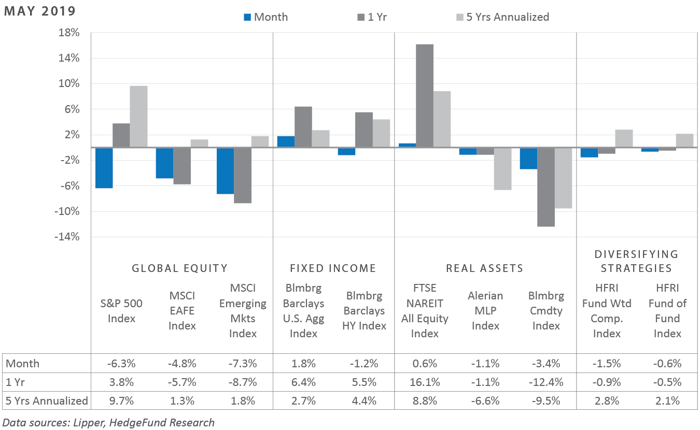 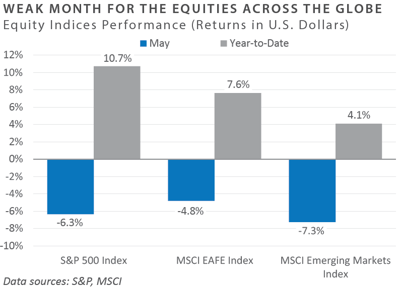 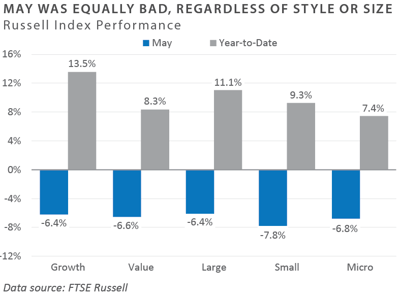 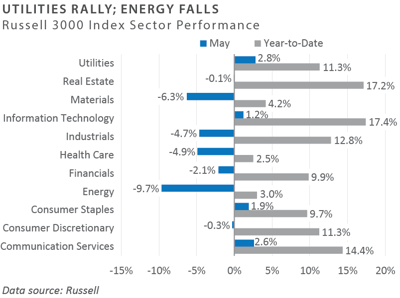 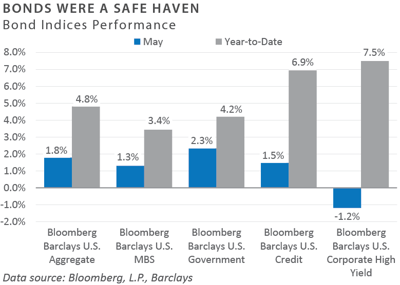 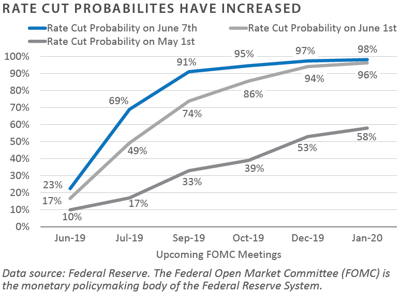 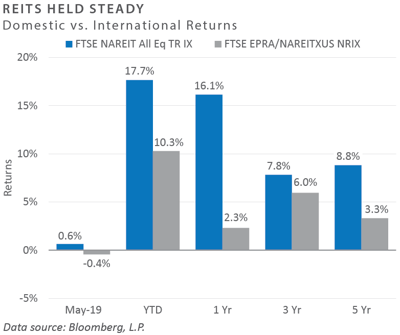 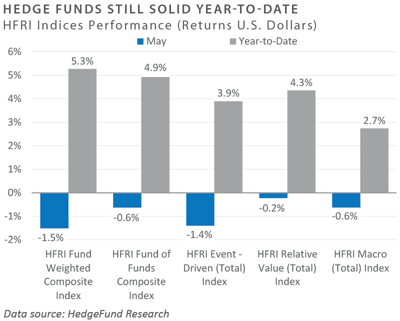