Our talented team of investment professionals regularly create and distribute educational materials delivering timely data, perspectives, and insight on the markets and related topics. You can review our most recent publications below.
Inflation Enigma | November 23, 2020

View PDF
A primary goal of investors is maintaining the purchasing power of their portfolios. With inflation as the key threat to purchasing power, mitigating its impact on portfolios remains a key concern. Inflation has remained well-controlled for nearly 40 years, and since the Global Financial Crisis it has been below the target set by the Federal Reserve.

However, recent monetary stimulus/support measures undertaken by the Federal Reserve to combat the effects of COVID-19 have led to a renewed focus on inflation as a potential risk. Many asset classes traditionally viewed as “inflation hedges” (i.e. gold and commodity futures) have not provided a risk premium necessary to justify their inclusion in portfolios. While certain asset classes do offer attractive returns and a correlation to unexpected inflation, there is no “silver bullet” for mitigating inflation risk.

To better help investors understand the balance of protection and total return, we address a brief inflation primer and history, the current inflation landscape, and considerations for an inflation minded portfolio.

A Short History of Inflation

Inflation, the rate at which a price increases over time, has two primary reference metrics – Headline Inflation and Core Inflation. 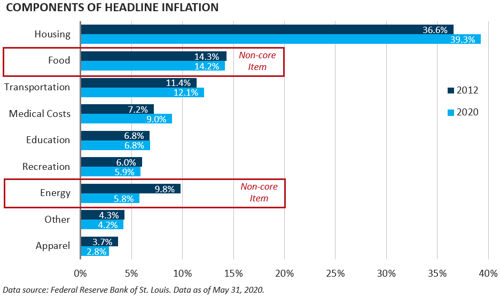 INFLATION IN THE U.S.

THE DRIVERS OF INFLATION

Cost push is characterized by an increase in core production input costs that are ultimately passed on to the end consumer. This could typically be created by reductions in supply for core inputs. Crude oil supply shortages in the 1970’s arising from the OPEC oil embargo and then again with the Iranian Revolution drove energy prices up 33.7% and 47.1%, at the respective height of each crisis.

Demand pull is created by an increase in demand for goods and services due to an increase in real wages or more readily available capital in the economy. The most notable period of demand-pull inflation could be seen in the 1960’s run up to the Great Inflation, when social programs and deep tax cuts boosted consumer demand past a point the economy could maintain.

THE GREAT INFLATION VERSUS THE GLOBAL FINANCIAL CRISIS
Many investors still debate why the unprecedented monetary response to the Global Financial Crisis (GFC) has not resulted in the high inflation levels seen in the in prior quarter century. Despite the monetary response, the U.S. has faced a number of deflationary forces over the past decade.

Perhaps no commodities are so pervasive as energy commodities, which have an influence across all components of the economy. At the core of production and our daily lives, increases in energy costs can have a disproportionate impact on consumers. However, the past decade has seen the adoption of horizontal drilling methods, making the U.S. one of the top oil producing nations, and introducing a large, stable source of energy into the global market. This has not only lessened dependence on foreign oil, but has also created competition against foreign oil, lower prices and providing disinflationary pressures to all areas of the economy.

ALL INFLATION IS NOT EQUAL

Inflation As It Stands Today

IS INFLATION STILL A CONCERN TODAY?

While inflation is not perfectly understood, one generally accepted explanation of its drivers is the Quantitative Theory of Money, which posits that inflation arises when the growth in money supply and circulation outpaces the volume of goods and services consumed.

Following this theory, one would assume that we should have seen rampant inflation following the GFC and now again following the COVID-19 response from the Fed and central government.

The Quantitative Easing response to the GFC did not have a marked impact on the money supply as lenders pulled back on the credit it made available, decreasing the velocity of money.

It is unlikely that inflation is gone for good – this muted increase in the overall money velocity may have been why we have not seen rampant inflation. However, given the Federal Reserve’s specified inflation target, it is unclear how far it will let inflation increase.

Today, we do see a substantial uptick in the money supply, but there are still a number of disinflationary forces at work that may prevent proportional spending increases.

These collective disinflationary pressures leave us with inflation expectations under 2.0%, a marked shift from 2018 year-end expectations that placed the entire inflation term structure above 2.0%.

Further challenging the matter is the expected move by the Fed to announce a higher inflation target. While the Fed has targeted 2.0% inflation since 2012, news came on August 4th that the Fed may consider raising this to a 2-4% range. While not a perfect example of what the U.S. might expect following this announcement, Japan made a similar announcement in 2013, raising the explicit target to 2.0% from 1.0%. This was followed by a period of increased inflation, though Japan was not able to maintain 2.0% inflation.

“To prevent [long run inflation expectations below 2%] and the adverse dynamics that could ensue… we will seek to achieve inflation that averages 2% over time… Appropriate monetary policy will likely aim to achieve inflation moderately above 2% for some time.”
—Jerome Powell, Chairman of the Federal Reserve, August 27, 2020

During this year’s Federal Reserve annual symposium Chairman Jerome Powell made notable statements about the future of the institution’s policies—communicating the intent to allow inflation to run above 2.0%.

However, as shown in the chart below, the Fed’s preferred inflation gauge has fallen short of the institution’s target since the Global Financial Crisis. This has driven long-term expectations below the target, which the Fed fears can further drive inflation lower.

One paper presented at the conference noted that this pandemic will likely shift corporate and investor mindsets, increasing risk aversion for decades to follow, creating further disinflationary pressures.

Expected inflation has been factored into asset prices already and is nearly impossible to hedge against. Further, the expectation of inflation may only serve to further exacerbate inflation by drawing forward demand to purchase at current prices.

“When people begin anticipating inflation, it doesn't do you any good anymore, because any benefit of inflation comes from the fact that you do better than you thought you were going to do.”
—Paul Volcker, Former Chairman of the Federal Reserve 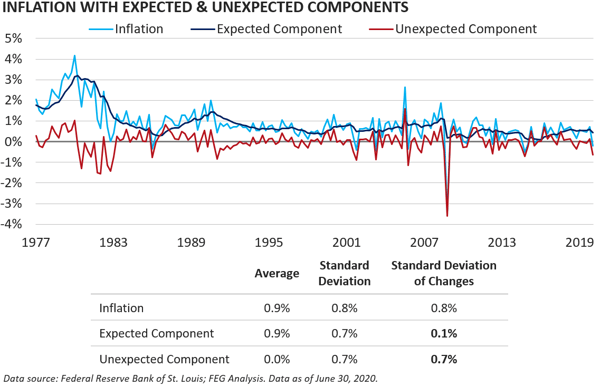 INFLATION PREDICTIONS ARE AVAILABLE, BUT NOT ACCURATE
Like other aspects of financial markets, inflation is not a simple metric to predict or time. Consensus forecasts are heavily influenced by historical inflation rates, with much of the weight given to the most recent trailing 12-month inflation rate. This results in a smoothed view of future inflation that is often inaccurate, suggesting that portfolios may benefit from hedge against unexpected inflation.

Inflation predictions are heavily influenced by recent experience, resulting in forward expectations similar to the trailing 12-month rate. In reality, these expectations are not terribly accurate, suggesting an inflation hedge should be considered for inclusion in a portfolio.

DEVISING AN INFLATION MINDED PORTFOLIO
Creating a successful portfolio that is mindful of inflation risks is more than selecting assets with attractive inflation hedging qualities. As noted below, commodity futures may be the best asset class to hedge inflation risk, but as we note later, this becomes an expensive endeavor. 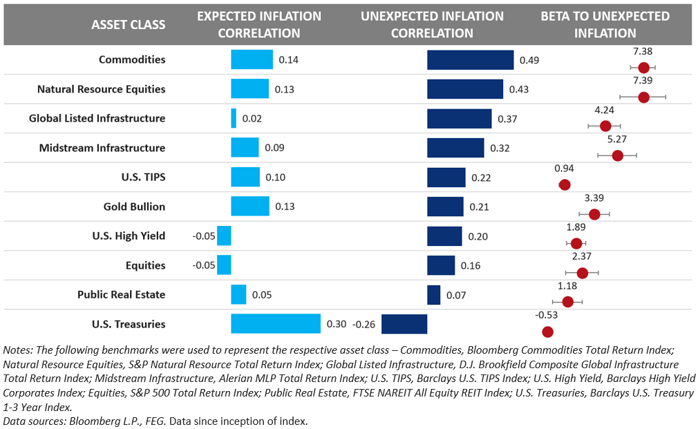 INFLATION CORRELATIONS COME WITH A TRADE OFF
Despite strong protections from unexpected inflation, commodities prove to be an expensive hedge when considering the opportunity cost of alternative opportunities. 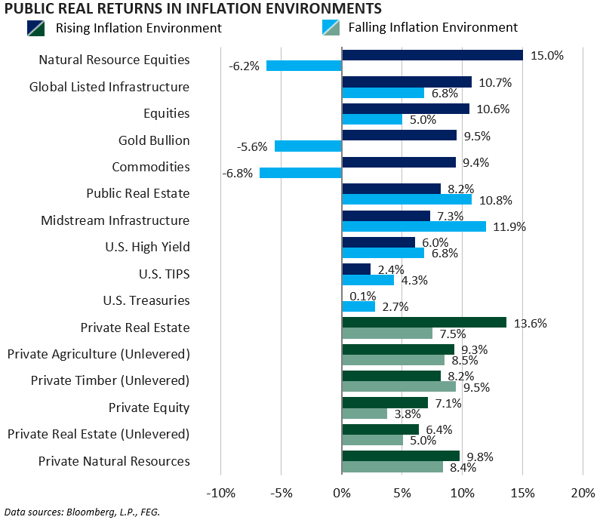 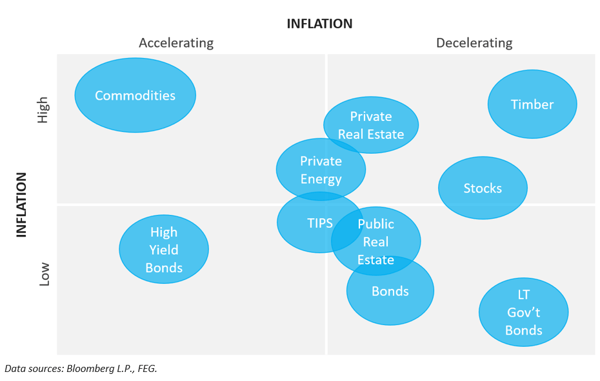 THE GOLD QUESTION
Perhaps more than any other asset, gold is most often cited as offering a “hedge against inflation.” We have established it maintains a moderate correlation to unexpected inflation relative to other asset classes, but is not as effective at providing attractive real returns in both rising and falling inflation regimes.

Gold maintains a strong inverse correlation to real interest rates. While gold climbed through the COVID crisis, reaching all-time highs in August 2020 of over $2,000/troy ounce, real interest rates were driven negative to their lowest rate since the inception of TIPS.

Unlike stocks and bonds, gold does not have earnings or pay dividends. One may consider stocks of mining companies, but this will not replicate bullion exposure if that is the ultimate target.

However, it should be noted that gold tends to provide strong protection in economic catastrophes and collapses in fiat currencies despite its weak correlation to inflation.

INFLATION IS LOW, BUT REMAINS A RISK FOR INVESTORS


HEDGING INFLATION IS IMPORTANT, BUT UNDERSTAND ITS COSTS

FUTURE INFLATION IS UNLIKELY TO LOOK LIKE IT HAS HISTORICALLY