Our talented team of investment professionals regularly create and distribute educational materials delivering timely data, perspectives, and insight on the markets and related topics. You can review our most recent publications below.
January 15, 2020

The fourth quarter of 2019 brought broad-based gains across most major global asset classes and categories, punctuating an exceptionally strong calendar year that provided investors with handsome gains across nearly every corner of the global investment universe. Impressive performance throughout the year reversed the poor market performance in 2018, which, in contrast to 2019, included negative performance across most corners of the market observed by FEG. Critical to the market’s gains in 2019 included three Federal Reserve (Fed) interest rate cuts and a resumption of balance sheet accommodation, a new asset purchase program by the European Central Bank (ECB), and a late-year Phase One trade deal between the U.S. and China. Broadly speaking, domestic assets relatively outperformed international assets through most of the year, with risk-on momentum failing to detract from the allure of fixed income—which experienced particularly strong performance, even in the face of historically-low interest rates. Real assets also participated in the market rally, particularly rate-sensitive REITs, while late-year seasonal pressures served as a headwind to energy infrastructure performance.

There was an abundance of market-moving events and themes in 2019, with notable examples including heightened global trade tensions between the U.S. and many of its key trading partners, particularly China, numerous inversions along the U.S. Treasury yield curve, mounting evidence of a global manufacturing recession, sharply declining global interest rates, geopolitical shocks in the already-volatile Middle East, the impeachment of President Trump by the House of Representatives, and numerous steps taken by global central banks intended to counterbalance global growth headwinds.

Despite a steepening “wall of worry,” most major areas of the global investment universe produced outsized performance for the year, highlighting the often-disconnected nature of economic data and market performance. Indeed, real GDP growth slowed meaningfully across both the U.S. and euro zone, with U.S. growth easing to 2.1% through the third quarter—the slowest growth rate since first quarter 2017—and euro zone growth cooling to 1.2%, its weakest pace in six years.

A number of factors on the near-term horizon have the potential to keep the current expansion on track, including the significant room for improvement in U.S.-China trade relations, the potential for fresh fiscal stimulus in 2020, the prospect for a return of synchronized global central bank balance sheet accommodation (QE), among other latent cycle-extending tailwinds.

The chart above highlights the growth headwinds facing policymakers in 2020, as these indices—as their names suggest—are designed to lead changes in the business cycle. Monetary authorities put forth a number of policy adjustments in 2019 that had the potential to reverse declining LEI growth rates, including three consecutive Fed interest rate cuts beginning in July, a resumption of Fed balance sheet expansion via the Treasury repo market, a lowering of the ECB’s deposit facility rate deeper into negative territory, and a fresh asset purchase program by the ECB beginning in November.

On October 11, the Fed announced it would begin purchasing T-Bills in order to replenish declining banking system reserve balances brought on by the previous quantitative tightening, which resulted in a more than $700 billion reduction in the Fed’s balance sheet. Since last summer, the Fed’s balance sheet has increased by over $400 billion.

In the eyes of the market, the combination of multiple Fed interest rate cuts and a material expansion in its balance sheet may be sufficient to keep the U.S. expansion on track, as both Fed funds and eurodollar futures have priced in just one potential 25 basis point Fed rate cut to begin in 2020. The means and scope by which the Fed seeks to cushion the U.S. economy during the next economic downturn, with a sub-2% federal funds rate and a balance sheet nearly 20% the size of the overall economy, may prove to be one of the most pivotal factors asset allocators face over the cyclical horizon.

In summary, market performance across most major areas of the global investible universe was overwhelmingly positive in 2019 despite a weakening fundamental backdrop, particularly abroad. The return of stimulative monetary policy initiatives in the U.S. and euro zone was a crucial contributing factor that helped to explain the disconnect between strong market performance and a weakening economic backdrop, but it may have come at the expense of policymakers’ ability to cushion their respective economies from future downturns. 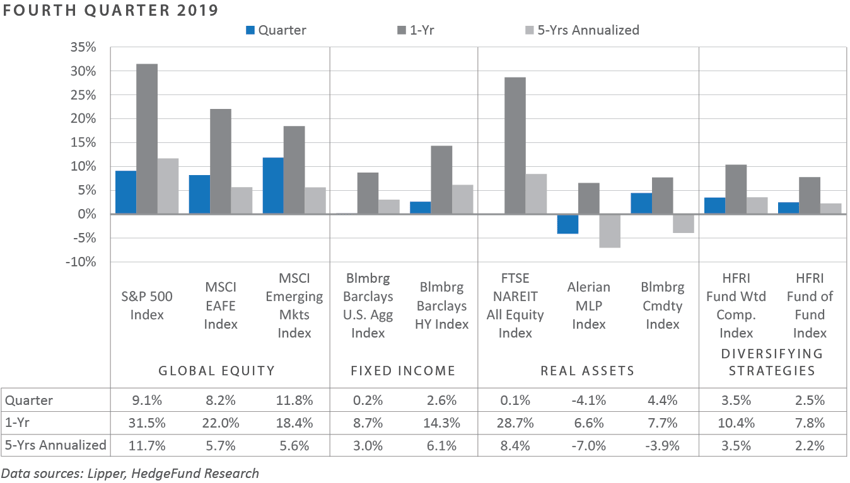 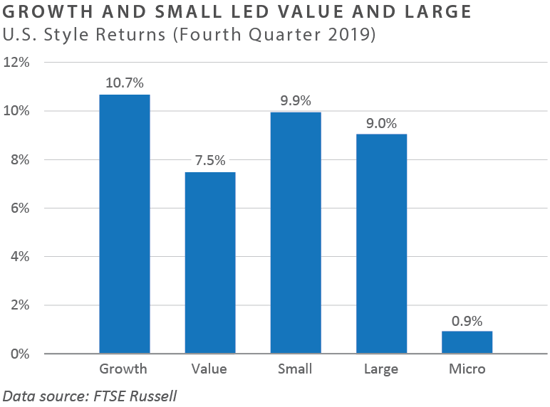 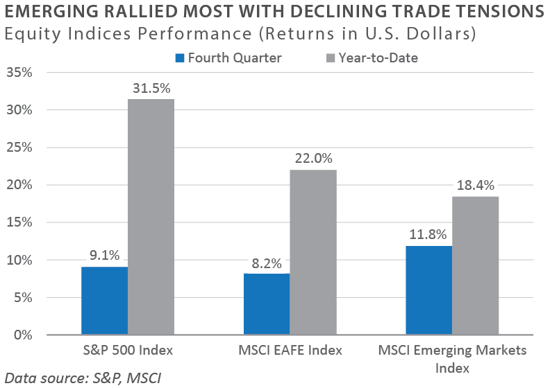 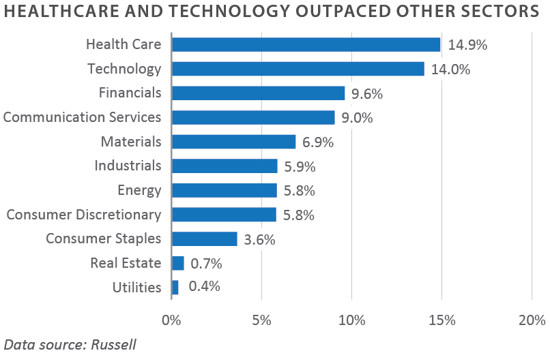 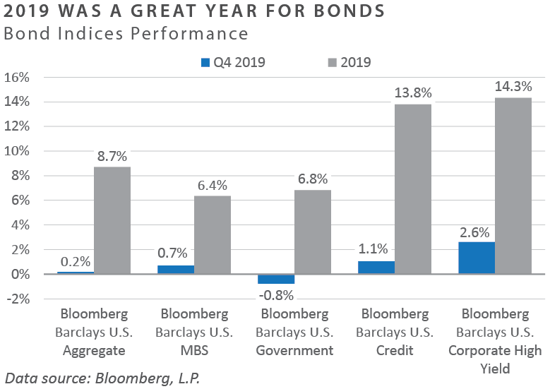 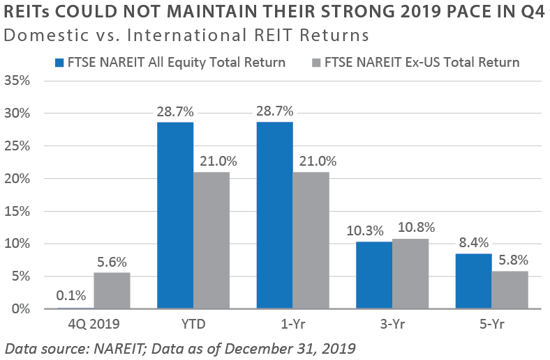 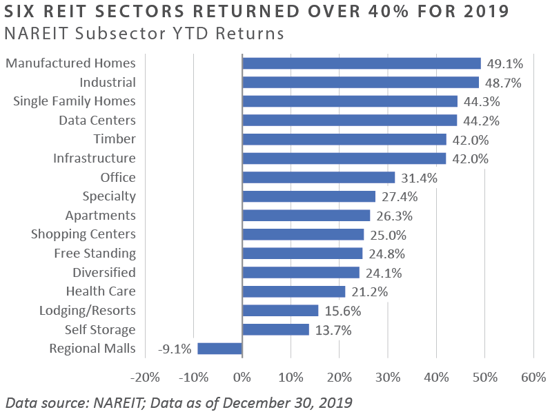 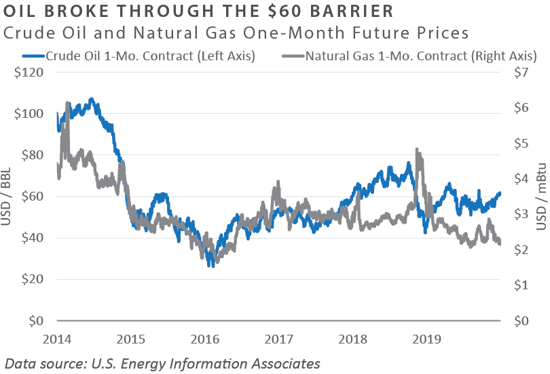 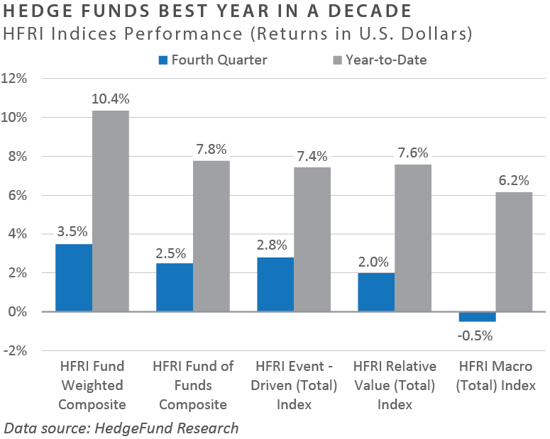