Our talented team of investment professionals regularly create and distribute educational materials delivering timely data, perspectives, and insight on the markets and related topics. You can review our most recent publications below.
Mixed Results in Private Markets | February 26, 2020

The second half of 2019 was a bit rocky for some of the private markets. Venture-backed companies that entered the public sphere had mixed results, which may have pulled down overall valuations for the sector. Credit funds were generally flat for the period and energy continued to be volatile, with private energy generally performing in line with its public market counterpart. Buyout funds and real estate funds provided positive returns in the quarter, but both lagged their public benchmarks.

While it is interesting to consider returns for the quarter, the longer trends are far more relevant. Long term, the private markets continue to demonstrate excess returns relative to public markets in all sectors except real estate.

The amount of capital raised in private markets continues to be concerning to long-term investors, although the depth and transparency in these markets continues to increase. It can be difficult to remember that poorly executed strategies or excess capital can be damaging to results in the current environment. In private equity, for example, the lost decade of venture capital investing that preceded the current one has been forgotten.

Looking back over the past 10-year period at the top-to-bottom quartile performance of venture and buyout strategies, performance appears similar. However, taking the longer 20-year view, the volatility is evident. (Note that the 10- and 20-year returns in the table represent pooled averages, while the private equity returns graph reflects median fund returns.).

Looking forward, the dominance of growth investing, which is somewhat akin to venture investing, shows little signs of waning. Low interest rates and accommodative government policies support a “risk-on” market even if the duration of the current cycle is concerning.

Elevated fundraising and investing activity coinciding with high valuations give reason for concern, although the robust exit market is encouraging for investors who committed to venture funds earlier in the decade. Initial public offering and acquisition activity pushed up venture capital returns for the quarter, attracting the attention of capital allocators. Performance has been strong but remains meaningfully unrealized for more recent vintage years. 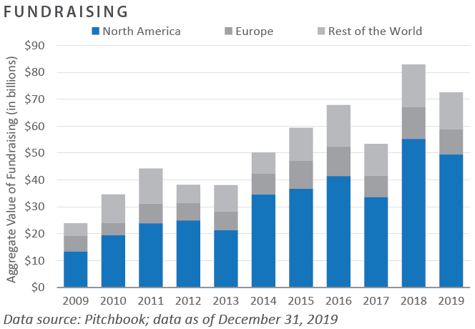 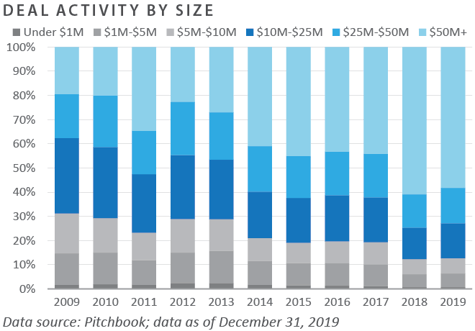 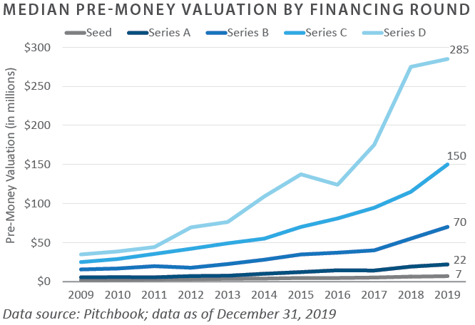 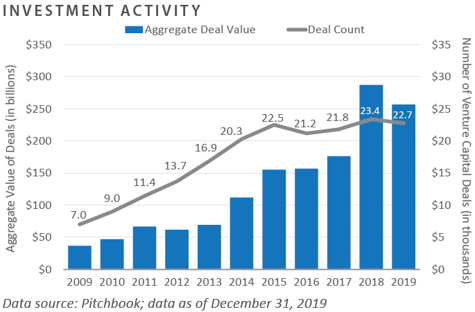 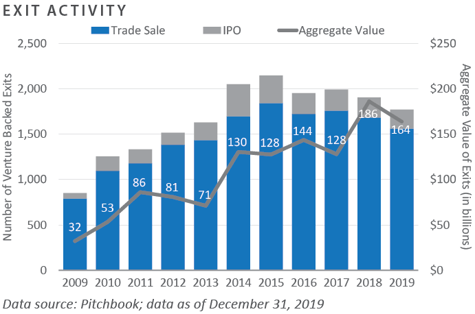 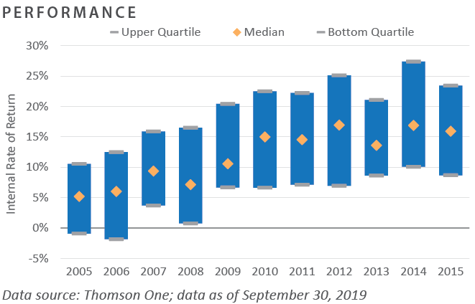 Despite these trends, private equity fundraising remains constant and shows no sign of slowing. Limited partners continue to allocate capital to leveraged buyout strategies, with the bulk of the capital in vehicles raising more than $1 billion in aggregate capital commitments. The proliferation of capital allocated to middle market strategies may have have an impact on the lower middle market in the form of higher valuations and increased deal activity. The number of transactions between private equity firms—i.e., secondary buyouts or sponsor-to-sponsor—may increase. 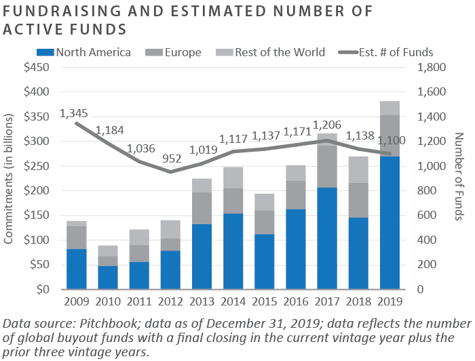 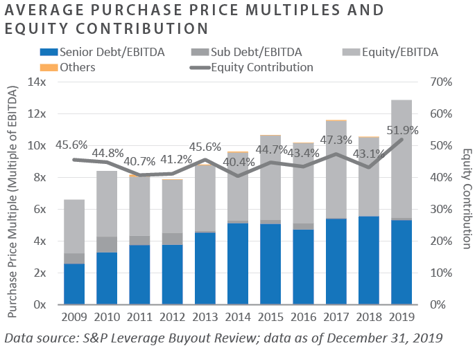 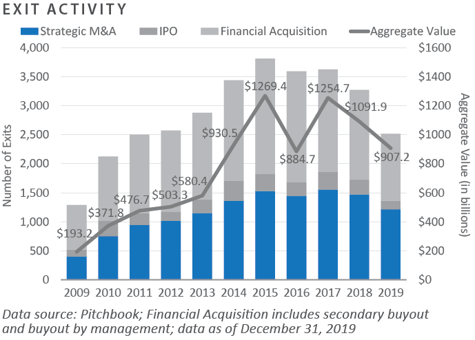 Private debt fundraising is off its peak levels but remains strong, with direct lenders continuing to gather a large share of commitments versus other private debt strategies. Select managers are passing on more transactions than in the past, making it difficult for them to pick credits wisely and maintain the investment pace promised to investors. Fissures in the public credit markets may be forecasting future distressed opportunities, although false flags have been more prevalent in the recent past.

With select managers continuing to pass on more transactions than in the past, picking credits wisely and maintaining the investment pace promised to investors has proved an ongoing struggle. Fissures in the public credit markets could foreshadow a future distressed opportunity, although false signals have been more prevalent in the recent past. 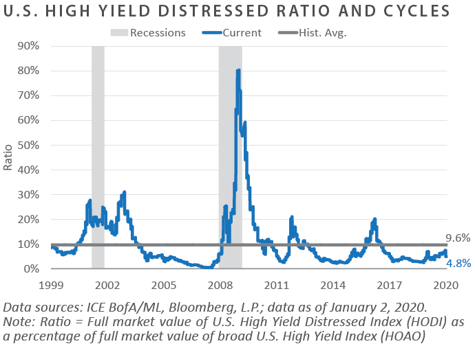 Real Estate is now 10 years into recovery and, despite cap rates being near record-lows in many markets, commercial real estate continued to attract record levels of investment from institutional investors through 2019. The interest rate environment has been a key factor driving returns, as investors have come to view real estate as a “fixed income substitute” offering relatively attractive yield compared to government bonds. As noted below, broad demographic trends may continue to present opportunities within real estate, including growth in online retailing (industrial), shared work environments (co-working), and challenges for first-time homebuyers, which impacts residential housing. 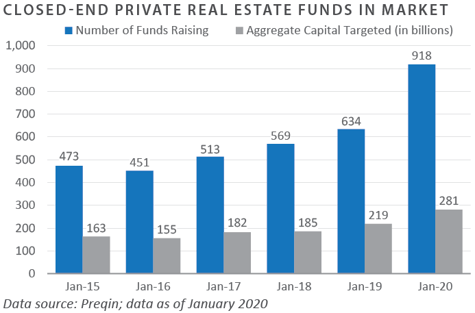 The U.S. energy sector continued to face headwinds during 2019, driven by ongoing bankruptcies, volatile commodity prices, and the overhang of excessive leverage. Access to the capital markets for energy companies remained limited and public energy companies faced pressure from shareholders to preserve cash and right-size balance sheets. The result was widespread cuts in capital spending budgets for 2020 by most exploration and production (E&P) companies. Limited realizations and poor performance through the downturn have created headwinds for private energy fundraising. As a result, one of the emerging trends in private energy during 2019 was upstream managers pivoting to renewable energy through new fund offerings targeting investments in clean energy. 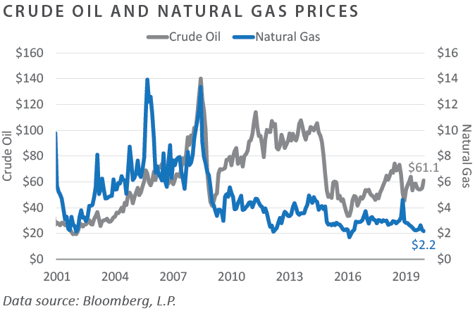 The U.S. energy sector continued to face headwinds during 2019, driven by ongoing bankruptcies, volatile commodity prices, and the overhang of excessive leverage. Access to the capital markets for energy companies remained limited and public energy companies were under pressure from shareholders to preserve cash and right-size balance sheets. The result was widespread cuts in capital spending budgets for 2020 by most exploration and production (E&P) companies. According to Haynes and Boone Oil Patch Bankruptcy Monitor, the cumulative number of upstream bankruptcy filings since 2015 topped 200 as of year-end 2019 and included $122 billion in debt.⁴⁴ The number of filings decreased substantially in 2017 and 2018, with 24 and 28, respectively; however, following a sharp decline in oil prices in late 2018, the number of filings increased to 42 in 2019.⁴⁵ A recent example was the bankruptcy of EnCap-backed Southland Royalty in January 2020. In its bankruptcy filings the company cited lower natural gas prices and an inability to service debt with limited cash flow.⁴⁶ Many companies face mounting debt maturities during the next two-to-three years, which could result in further distress in the sector.

PRIVATE ENERGY FUNDS: One of the emerging trends in private energy during 2019 was upstream managers pivoting to renewable energy through new fund offerings targeting investments in clean energy. EnCap, Lime Rock, and Kayne Anderson all introduced funds with mandates to invest in what is broadly defined as the “energy transition.” This trend reflects the growing interest of investors in renewable energy as well as challenges facing upstream funds seeking to raise capital. Limited realizations and poor performance through the downturn have created headwinds for private energy fundraising. Fundraising in private energy peaked in 2014, with 40 funds raising $31 billion, but has since fallen below $20 billion in the past two years.⁵¹.

Bloomberg Barclays US Corporate High Yield Index represents the universe of fixed rate, non-investment grade debt. Eurobonds and debt issues from countries designated as emerging markets are excluded but, Canadian and global bonds (SEC registered) of issuers in non-EMG countries are included. The index includes the corporate sectors: Industrials, Utilities, and Finance, encompassing both US and non-US Corporations. See www.bloomberg.com for more information

The Russell Indices are constructed by Russell Investment, There are a wide range of indices created by Russell covering companies with different market capitalizations, fundamental characteristics, and style tilts. See www.russellinvestments.com for more information.

The FTSE NAREIT Composite Index (NAREIT) includes only those companies that meet minimum size, liquidity and free float criteria as set forth by FTSE and is meant as a broad representation of publicly traded REIT securities in the U.S. Relevant real estate activities are defined as the ownership, disposure, and development of income-producing real estate. See www.ftse.com/Indices for more information. The S&P 500 Index is capitalization-weighted index of 500 stocks.

The S&P 500 Index is designed to measure performance of the broad domestic economy through changes in the aggregate market value of 500 stocks representing all major industries.

The NCREIF Property Index is a quarterly time series composite total rate of return measure of investment performance of a very large pool of individual commercial real estate properties acquired in the private market for investment purposes only.

HFRI ED: Distressed/Restructuring Index
Distressed/Restructuring strategies which employ an investment process focused on corporate fixed income instruments, primarily on corporate credit instruments of companies trading at significant discounts to their value at issuance or obliged (par value) at maturity as a result of either formal bankruptcy proceeding or financial market perception of near term proceedings. Managers are typically actively involved with the management of these companies, frequently involved on creditors' committees in negotiating the exchange of securities for alternative obligations, either swaps of debt, equity or hybrid securities. Managers employ fundamental credit processes focused on valuation and asset coverage of securities of distressed firms; in most cases portfolio exposures are concentrated in instruments which are publicly traded, in some cases actively and in others under reduced liquidity but in general for which a reasonable public market exists. In contrast to Special Situations, Distressed Strategies employ primarily debt (greater than 60%) but also may maintain related equity exposure.