Our talented team of investment professionals regularly create and distribute educational materials delivering timely data, perspectives, and insight on the markets and related topics. You can review our most recent publications below.
2019 generated strong returns | January 15, 2020

Numerous stimulative measures were taken by global central banks in an effort to reverse global fundamental deterioration, much of which continued to be attributed to an ongoing weak global manufacturing backdrop. Geopolitical events—including the impeachment of President Trump by the House of Representatives, a mid-September attack on a critical Saudi Arabian crude production facility, and more recently retaliatory blows between the U.S. and Iran—have failed to take the wind out of the market’s sails.

Global equity performance in both the fourth quarter and calendar year appeared nothing short of stellar, as U.S. large cap equity produced a greater than 31% return during the year, including a 9.1% gain in the fourth quarter alone, besting both international developed and emerging market equity for the calendar year. However in December emerging markets more than doubled the return of U.S. large cap, buoyed by a Phase One trade deal between the U.S. and China and a more than $100 billion monthly increase in the Fed’s balance sheet. Stylistically, growth’s multi-year trend of outperformance versus value continued in 2019, with bouts of short-term reversal pressures, particularly in the second half of the year.

Similar to the equity markets, bond performance in 2019 was largely positive, particularly for longer-duration and credit-oriented sectors. Multiple inversions along the Treasury yield curve in the first half of the year sparked recessionary fears, but three consecutive Fed interest rate cuts and a resumption of balance sheet expansion helped reverse curve flattening pressures, particularly in the second half of the year. Notably, global interest rates spent the majority of 2019 moving lower, as the share of negative-yielding global debt reached a new record high at nearly a third of the market. Coinciding with the surge in negative-yielding global bonds included a fresh record low in the 30-Year U.S. Treasury Bond, which dipped below 2% in August. Despite immense downward pressure on interest rates, credit spreads tightened meaningfully, with high yield spreads tightening nearly 200 bps year-over-year.

As with equities and fixed income, performance in real assets was strong in 2019, albeit with less directionality. Real Estate Investment Trusts (REITs), which have evolved into a bond proxy in recent years, benefitted significantly from the decline in U.S. interest rates, while pressuring many REIT valuation levels to multi-year highs in the process. Energy infrastructure generated strong returns in the first half of the year but experienced a loss of momentum in the latter half of 2019 as the sector faced seasonal headwinds and fundamental concerns. Geopolitical shocks in the Middle East drove wild swings in oil prices, which increased more than 30% year-over-year.

In a welcomed reversal of fortune for investors, 2019 brought widespread gains across the global investment landscape, highlighting the often disconnected relationship between economic fundamentals and market performance. During the year, U.S. real GDP growth slowed from a 2.5% annual growth rate at the end of 2018 to a 2.1% pace through the third quarter—a 2.5-year low. The most recent data out of the euro zone shows real GDP growth running at an annual pace of just 1.2%, unchanged since 2018. Prospective growth rates across the U.S., euro zone, and Japan are expected to face headwinds in the coming quarters, with forward measures of the business cycle reflecting a continuation of slowdown pressures through November. 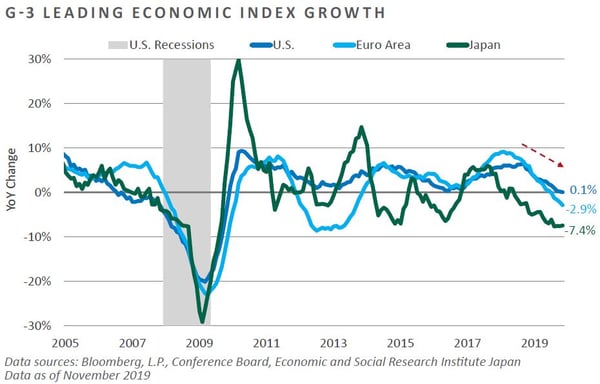 Similar downward growth momentum was felt in China, where real GDP growth slowed to the weakest pace in at least 27 years, at a 6.0% annual rate through the third quarter. While China’s growth advantage versus the U.S. remained in place in 2019, the spread narrowed to one of the lowest levels in modern records, at 3.9%. 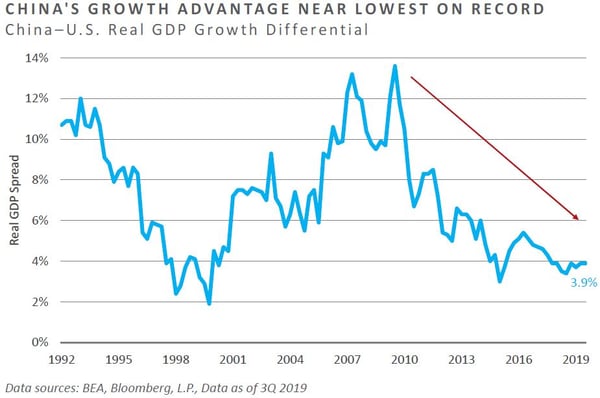 Perhaps coincidentally, the narrowing spread between Chinese and U.S. GDP growth since 2009 took place during a period of significant underperformance on behalf of emerging market equities. For the 10-year period ending third quarter 2019, which is the most recent quarterly update for both U.S. and China GDP, the MSCI Emerging Markets Index underperformed the S&P 500 Index by a staggering 207.4%, or 9.8% annualized.

The fate of U.S.-China relations, which soured in 2019 before a late-year glimmer of hope in December, not only seems to matter for the current U.S. economic expansion—and thus President Trump’s re-election odds—but also to relative growth and equity market performance trends, which have favored the U.S. over the trailing decade.

Global Central Banks to the Rescue

Investors may be surprised to learn that in a year in which U.S. large cap equities returned more than 30%—one of only two calendar-year performances greater than 30% in the last two decades—both corporate profits and earnings growth were flat-to-negative, broad labor market gauges reflected essentially zero growth year-over-year, U.S. manufacturing dug deeper into contraction, and numerous inversions took place along the Treasury yield curve. Bridging the gap between the market’s strong performance and the aforementioned fundamental sore spots included a dovish shift in many global central banks’ monetary policy initiatives.

In the U.S., the Fed commenced a “mid-cycle adjustment” in policy at their July meeting, which included what amounted to the first of three consecutive interest rate cuts, placing the upper bound on the federal funds rate at 1.75% by the end of the year.

The Fed poured even more monetary fuel onto a red-hot market in mid-October, announcing the beginning of T-Bill purchases with the purpose of replenishing declining banking system reverse balances—i.e., liquidity—which resulted from the Fed’s previous quantitative tightening program. After reaching a localized “low” of $3.76 trillion in August, the Fed’s balance sheet increased more than $400 billion to end the year at $4.17 trillion. 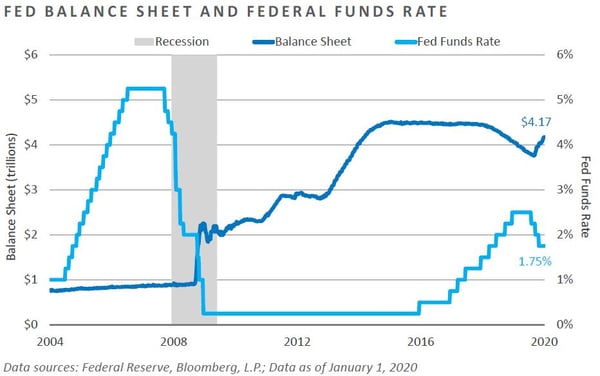 The return of stimulative U.S. monetary policy through a combination of interest rate cuts and balance sheet expansion via the Treasury repo market has sparked investor concerns of a “melt-up” in the U.S. equity markets. Indeed, through the end of the year, the normalized value of the S&P 500 Total Return Index since the March 9, 2009 bottom stood approximately 12%, or roughly 3 standard deviations above-trend. 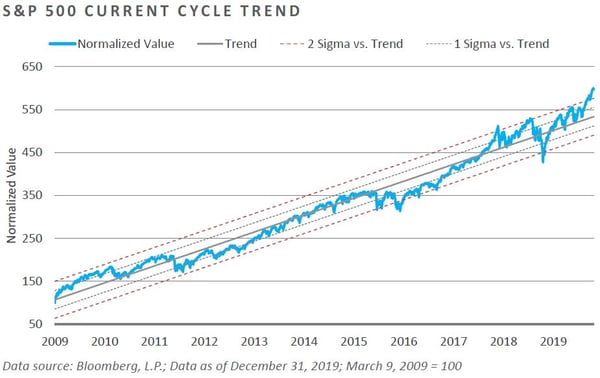 The European Central Bank (ECB) took stimulative measures of their own in 2019, including a lowering of the deposit facility rate deeper into negative territory to -0.50%, as well as a new asset purchase program which began in November.

With economic growth rates already low and the potential to be driven even lower throughout 2020, the pressure on monetary authorities to exert their influence over the market is likely to remain a dominant theme in the coming quarters. Central bank policymakers’ accomodative stance potentially comes at the expense of their ability to cushion their respective economies from future downturns through conventional means.

Generally speaking, the U.S. economy displayed strength in 2018, as tax stimulus permeated throughout the economy and most fundamental gauges witnessed meaningful improvement. The Fed took advantage of this strength and hiked interest rates four times, likely a key driver behind the broad-based market weakness that led to negative performance across most major asset classes and categories in 2018.

Geopolitical forces and events are expected to dominate the headlines in 2020, including a potential for a resolution to Great Britain’s departure from the European Union, the unveiling of the next chapter in the normalization of U.S.-China trade relations, and the U.S. presidential election in November. More recently, the United States has traded blows with Iran, sparking concerns of further destabilization in the Middle East and the prospect for widespread military conflict.

Following a year of pivoting policy initiatives, futures markets have priced in the potential for an “on-hold” Fed throughout 2020, with a similar consensus on anticipated ECB policy actions. The market seems to be formulating a view that economic headwinds may abate, interest rates may drift higher thanks to forward-leaning central bank policy actions in 2019, the Middle East will remain a hotbed for instability but may fail to devolve into an all-out war among the world’s superpowers, the Senate is unlikely to reach a supermajority and impeach President Trump, and the U.S. and China may ultimately resolve their philosophical differences and reach a meaningful resolution.

By the conclusion of 2020, however, it is likely that many of the consensus forecasts from the beginning of the year will have missed the mark, perhaps by a wide margin. Consequently, there is a chance that alpha-generating market opportunities, which tend to be fleeting in market melt-up environments, may arise.

FEG remains confident its longstanding approach of seeking to build portfolios with unique active managers in conjunction with opportunistic positions that exhibit a margin of safety. By adhering to a process requiring constant surveillance of global asset valuations, fundamentals, and sentiment, FEG seeks to deliver results for our clients.

Diversification or Asset Allocation does not assure or guarantee better performance and cannot eliminate the risk of investment loss.

The HFRI Monthly Indices (HFRI) are equally weighted performance indexes, compiled by Hedge Fund Research Inc., and are utilized by numerous hedge fund managers as a benchmark for their own hedge funds. The HFRI are broken down into 37 different categories by strategy, including the HFRI Fund Weighted Composite, which accounts for over 2000 funds listed on the internal HFR Database. The HFRI Fund of Funds Composite Index is an equal weighted, net of fee, index composed of approximately 800 fund of funds which report to HFR. See www.hedgefundresearch.com for more information on index construction.